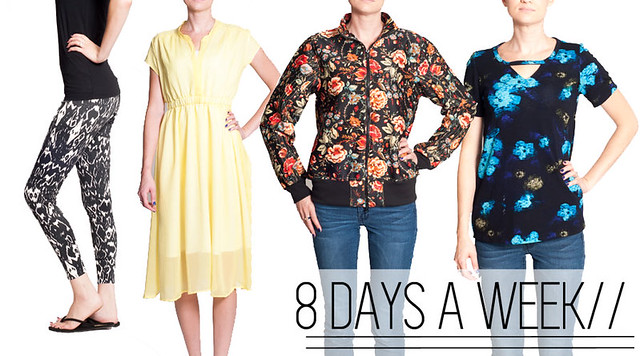 Of course, with testing 3 patterns back to back in September and early October, I obviously waited until the week before my birthday (so like October 10) to actually start sewing, which meant a lot of rushing and late nights and unpicking and back pains and limited sleep.

Now, I’m sure I’ve mentioned this before and I’m sure you’ve already noticed that I have a thing for purple. So I often pick it as the colour for my birthday outfits and this year was no exception. 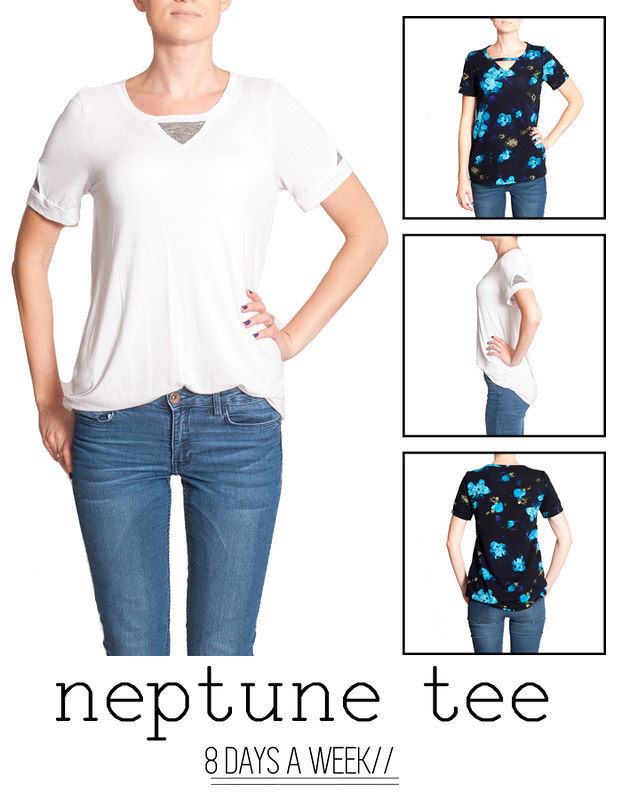 What makes this pattern so beautifully interesting is that you can choose cutouts or fabric accents or simply not use either to create about 21 different variations. And there are two hemline styles – straight or curved.

I always wondered how people got their cutouts so clean, only to discover that you use facings, duhhhh… thanks, Kate for clarifying that one! The triangle cutouts had instantly won me over when I first saw this collection, so my trusty violet interlock came out of the stash once again for this make.

Fit wise, I made a Large and it is easily a wearable muslin. My only issue being that the sleeve bands are a bit snug, but that may be due to fabric choice. I’m finding that the interlock does not do sleeve hems well and always end up closer than intended. Any visible tugging lines might also be due to my fabric choice, so I really want to do another Neptune Tee in cotton lycra or ponte to check the issues I’m seeing with this one. 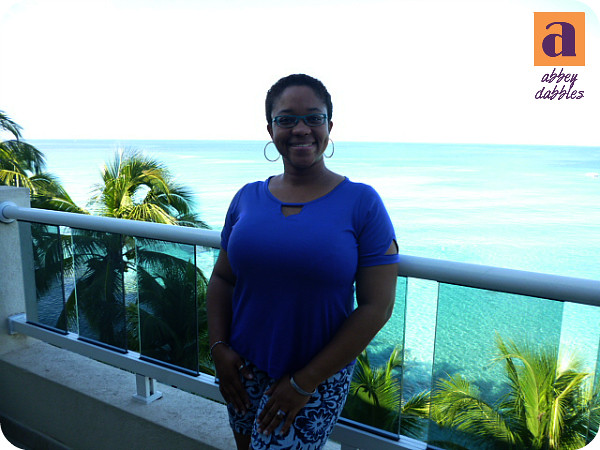 For me, the neckband turned out to be longer than is probably needed and you can see how it keeps bunching up at the back. I also think I may need to increase the hip width some, but I don’t know if it’s just this fabric, so I’ll also check that on the next one. 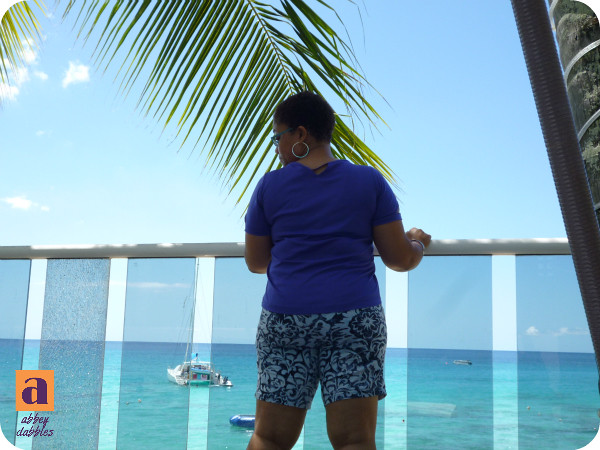 I’m actually wearing my unblogged Greenstyle Taylor shorts in these pics because I hadn’t finished the GTP joggers below in time for our vacation. 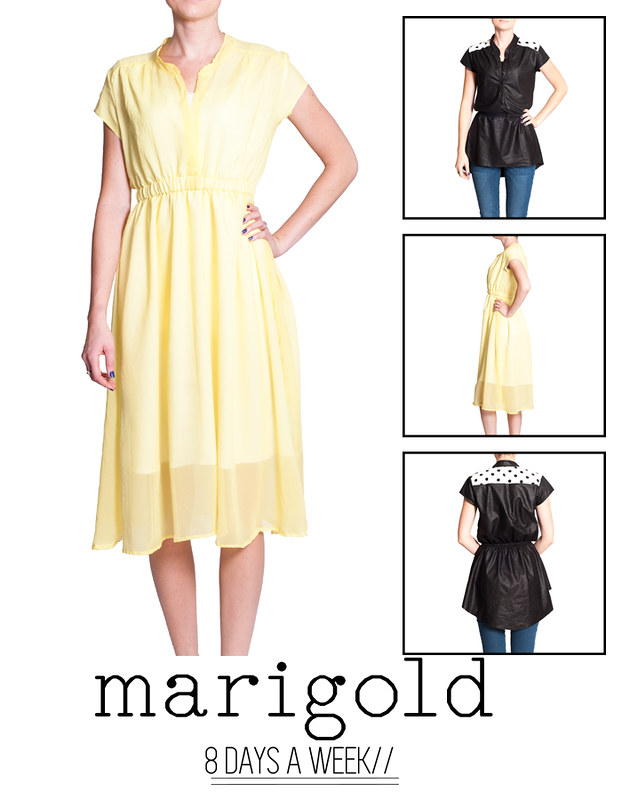 As long as you sew, the number one rule is to make a muslin for new patterns and/or designers so that you can test the fit and not waste your good and maybe expensive fabric. 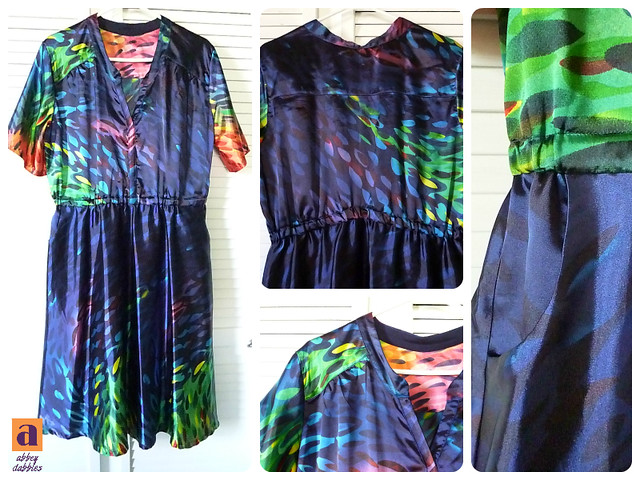 Not me though. Charging right on ahead after assembling the pattern, I chose to cut straight into my gorgeous multi brushstroke stretch charmeuse from Joann’s even though I had never sewn anything from Melissa Mora before. I had also never sewn silky or slippery fabric before and I found sewing with this to be pretty easy. *knocks wood* 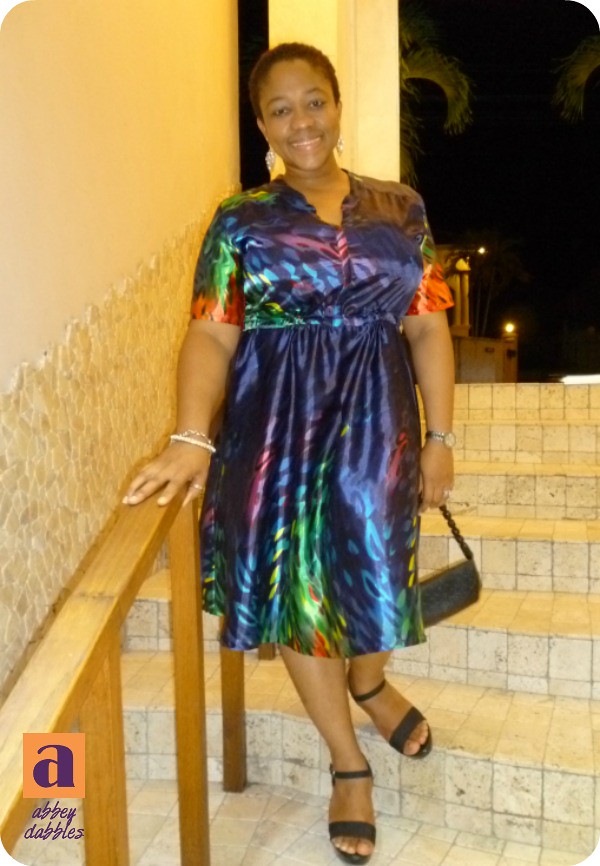 From my body measurements, I cut an XL, which also happens to be the largest size for this pattern btw, and Melissa has thankfully increased the size range for the new PA collection. But sheep that I am, I completely did not register how high the waist on this pattern was for all the small bust versions I had seen and with my girls, I generally have to lower the front waistline to account for my extra volume and reduce the likelihood of looking top heavy with an unintentional empire waistline. So although I love my dress, I hate where the waistline ended up. #usererror #bustygirlproblems 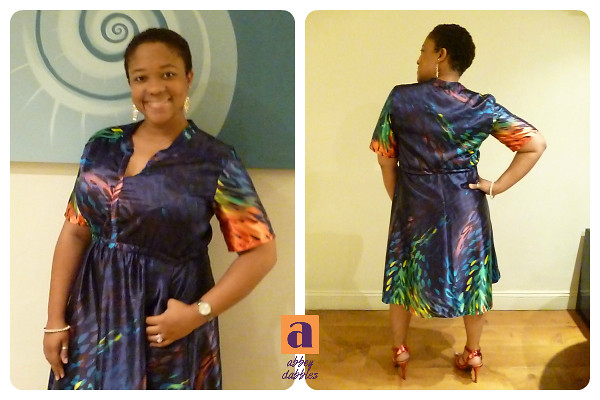 The pattern itself though is fantastic. The yoked shoulders with the gathering really help minimize some of my bustiness, which is always great. I knew with the limited time I had left that I wouldn’t be able to fiddle with button holes, so I simply sewed down the placket. I also opened up the neckline at the front a little, so that I’d get a V-shape instead of the original straight design of the pattern. 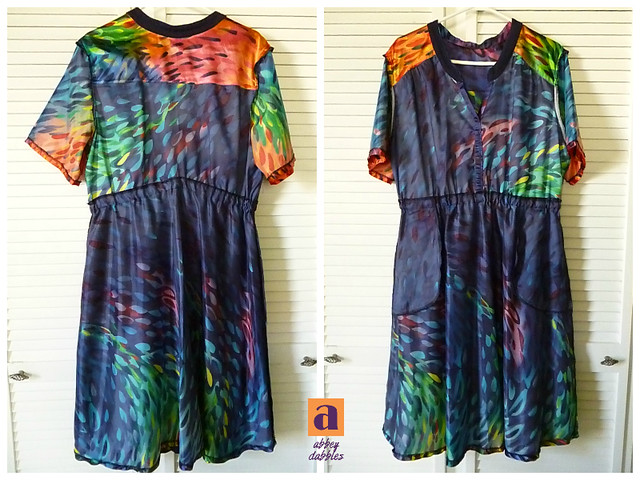 The pattern instructions were very specific and easy to follow. Plus it helped that there was a sewalong in the Blank Slate Facebook Group at the same time so I could check in with any part that I was unsure of. I absolutely loved how Melissa explained the Sandwich method for enclosing the seams on the back yoke. As you can see, I had to do a sway back adjustment as well, because there was way too much excess fabric pooling in this area; even more than the pattern intended IMO.

Go To Knit Pants by Go To Patterns 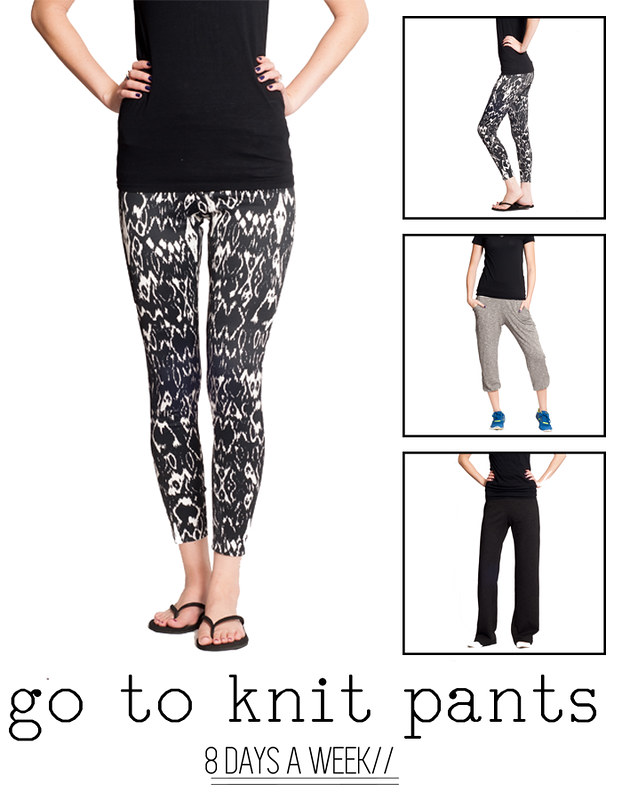 Now, let me tell you that I almost had a heart attack when I first opened the file and saw that it was 108 pages. Yes, 108. But there is a solid reason for that. Andrea Pannell, the designer, is offering 3 different style patterns in this one file – leggings, joggers and yoga pants – and has the pieces for each pants type separate, so for example, the leggings can be found only in pages A-1 to A-28. This way you don’t have to print the whole pattern file unless or until you want to do a different style.

Another great thing about this pattern is the size range – from XXS to XXXL fitting waists from 23-43″ and hips from 33-53″. For my first try, which I was hoping would be a wearable muslin for me, I cut an XL joggers based on my measurements. Then I gave it to my mother because it was just too big everywhere and was fitting strangely in the crotch. Sorry no pics wearing it. Mom has grown very fond of them and I haven’t seen them since I let her fit them.

Then I did a Large in this beautiful plum quilted pique knit, which is so soft and comfy but still looks fancy enough to not be mistaken for pajamas. This pair fit better at the waist for sure, but I know for the next pair that I need to give the hips some room, about half inch at the side seams. I did some crutch carvery on the front rise to reduce the extra fabric that was strangely bunching up at the front. I also did a 8 inch foldover yoga style waistband, that was cut with the width perpendicular to the grain, which gave it a control top kind of effect. Yayyy for tummy smoothness! 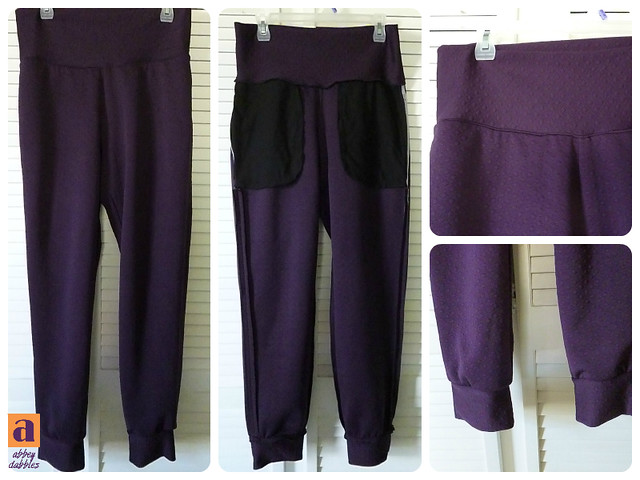 Wait, did you notice the pockets? The pattern includes in-seam pockets for the joggers option, and I ended up having to reduce the size of them by 1.5″ along the outer edge since the original design would have caused to pocket pieces to actually meet at the centre front seam. 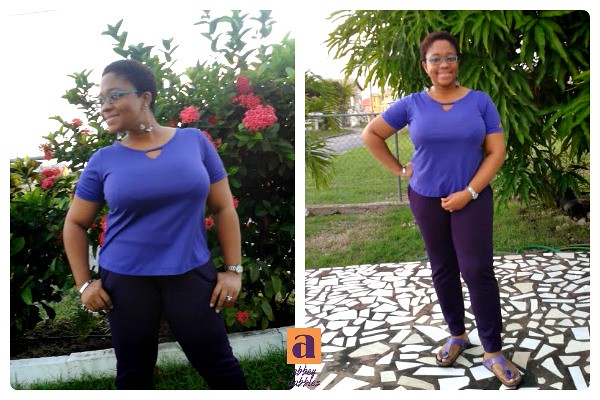 I wore this Neptune Tee and GTP Joggers outfit to my son’s birthday party in November, since I had run out of time to complete the joggers for my birthday.

The Pattern Anthology 8 Days a Week collection was released in September 2014. The only pattern I didn’t make yet was the Shwin Designs McCartney Jacket, which is truly awesomeness, but living in the Caribbean and not presently working in an air-conditioned environment, I’m not motivated to sew up one as yet. 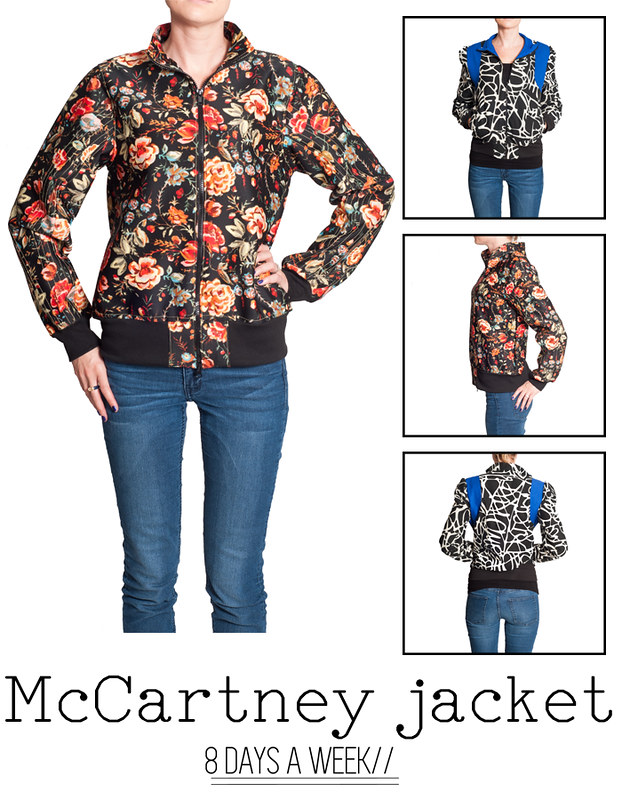 You can find all the tester versions on Pattern Anthology’s site here. Each of the four designers now carry their respective patterns in their individual shops and you can click on the direct links above to purchase.

Thankfully, my husband had planned a staycation for my birthday so I was able to rest and relax for a few days after that moment of insanity. Here’s a peek at our mini vacation: 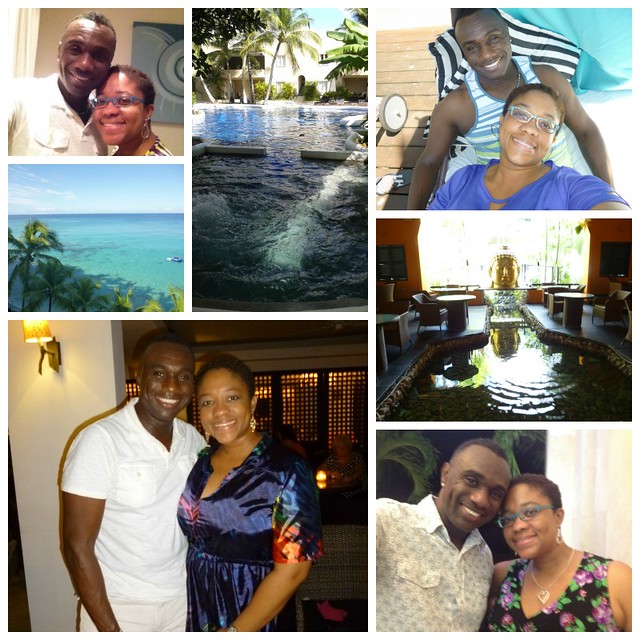 First clothing make for myself for 2023 🎉
I've been sitting on this awesome news since Boxing Day... y'all I won a sewing machine 🎉🎉🎉 and not any old machine either - the coveted Juki 2010Q 😍😍😍
First post of 2023 was going to be a cute dress, but this idea wouldn't leave my brain and this hacked Apex Pouch jumped the queue.
Here's to 2023 being so much better than 2022! 🥳🥳🥳🥳🥳🥳
Merry Christmas to all!
I cannot believe how cute this large #apexpouch is! 🤩